DISCLAIMER: This Health Library is for educational purposes only and does not necessarily reflect the services provided by this practice/facility.

Heartburn is a burning feeling behind the breastbone. Stomach acid and food back up from the stomach into the esophagus. It irritates the lining of the esophagus. Heartburn happen often or every once in a while.

Heartburn that occurs more than 2 times a week for several weeks may be gastroesophageal reflux disease (GERD). It can cause permanent damage over the course of time. 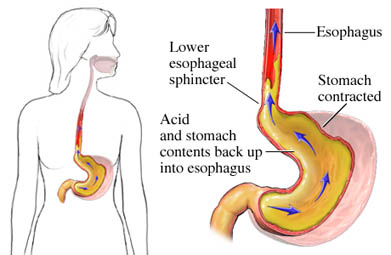 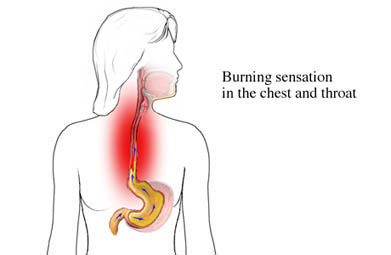 Factors that may increase your chance of heartburn or GERD include:

Foods and drinks that are more likely to cause symptoms include:

Medications and supplements that cause symptoms may include:

Heartburn often occurs after overeating or lying down after a big meal. The symptoms may last for a few minutes or a few hours.

Common symptoms may include:

The repeated, regular episodes can lead to other symptoms such as:

Long-term complications of GERD may include:

When Should I Call My Doctor?

Make an appointment to see your doctor if you have heartburn 2 or more times a week, every week.

Further testing is not always needed. Your doctor may order the following to look for complications:

Treatment will depend the cause of the heartburn. The goal is to prevent further symptoms and heal any damage.

Medicine may help relieve symptoms. Some can also help to repair damage. Many heartburn medicines are available over-the-counter. Options include:

Talk to your doctor about which ones may be best for you.

Surgery may be an option if:

The most common surgery for GERD is fundoplication . The doctor wraps the stomach around the esophagus. This creates extra pressure on the opening to the stomach and helps keep it closed.

There are a number of procedures that can be done with an endoscope. These procedures use a long thin tube called a scope. It is passed through the mouth and down the throat and has a camera that will help the doctor see inside. Small tools can also be passed through the scope to do a number of procedures. One example is transoral incisionless fundoplication (TIF). With TIF, fasteners are used to reshape the upper part of the stomach. It will help tighten the ring muscles.

LINX is a small band with magnetic beads. A surgeon places the band around the end of the esophagus where it meets the stomach. The magnets pull together to help close the opening. Swallowed food or drink push apart the beads so that it can move into the stomach.

Some people will be able to stop or reduce medicine after surgery.

Some people will be able to stop or reduce medicine after surgery.

There are no current guidelines to prevent GERD.

This content is reviewed regularly and is updated when new and relevant evidence is made available. This information is neither intended nor implied to be a substitute for professional medical advice. Always seek the advice of your physician or other qualified health provider prior to starting any new treatment or with questions regarding a medical condition.